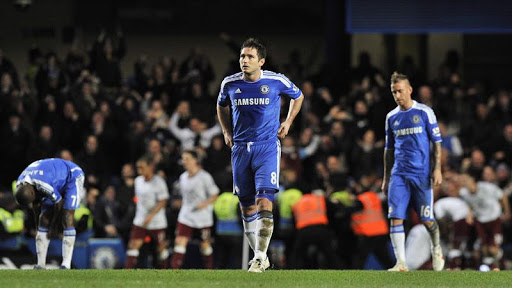 There must have been something in the air over New Year’s weekend in 2011/12, with the four teams occupying the Champions League qualification spots all failing to emerge victorious in the Premier League. Yet whereas third-placed Tottenham Hotspur at least managed a draw against Swansea City, each of Chelsea, Manchester United and Manchester City were unable to even pick up a point…

The Blues may have ultimately finished down in sixth in 2011/12, but they were well in the hunt for the top four during the festive period. Indeed, Andre Villas-Boas’ side occupied the final Champions League spot ahead of Liverpool on December 30, despite the fact that the Merseysiders had played a game more.

Aston Villa, meanwhile, had won only four of their first 18 matches and found themselves down in 12th spot. Alex McLeish had done little to win over sceptical supporters for whom it was difficult to forget the Scot’s connections with fierce rivals Birmingham City, and little was expected of the West Midlanders at Stamford Bridge.

Villa produced their best performance of the season up to that point, however, running out 3-1 winners thanks to goals from Stephen Ireland, Stiliyan Petrov and Darren Bent. It was Chelsea who drew first blood midway through the opening period, but Didier Drogba’s penalty was cancelled out by Ireland five minutes later, before goals in the 83rd and 86th minutes earned the Villans a terrific victory.

Manchester United headed into their New Year’s Eve meeting with Blackburn in stunning form, having taken 25 points from the last 27 on offer. A 5-0 evisceration of Wigan Athletic on Boxing Day was most memorable for a Dimitar Berbatov hat-trick, but despite such a substantial margin of victory, Alex Ferguson’s men remained behind table-topping neighbours Manchester City on goal difference.

United were expected to make light work of Blackburn, who were propping up the table having won just two of their first 18 matches. Even when Steve Kean’s side took the lead through Yakubu Aiyegbeni in the 16th minute, few expected them to leave Old Trafford with anything other than a 12th defeat of the season.

Yakubu doubled Rovers’ lead early in the second half, but Berbatov struck seconds later to halve the deficit. The Bulgarian then levelled things up soon after the hour mark, before Grant Hanley headed home a late winner – his first goal as a professional – to send the away end delirious and Ferguson into fury.

Manchester City had the chance to move three points clear of their arch-rivals on New Year’s Day, but they too suffered a surprise defeat. Sunderland were not in quite as bad a predicament as Blackburn at this stage of the season, but there was no doubt that Martin O’Neill’s side – who were just three points outside the bottom three – were locked in a relegation battle.

There were opportunities for both teams throughout the game, but Sunderland spent the closing stages pinned back in their own half. Deep into second-half stoppage time the hosts spotted a chance for one final attack, working the ball out to Ji Dong-won on the left-hand side. Roared on by the home crowd, the South Korean exchanged passes with Stephane Sessegnon before coolly rounding Joe Hart and tucking the ball home to give