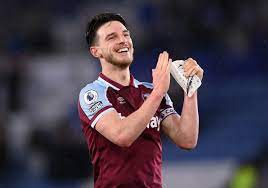 Given his reputation as one of the best midfielders in English football, Declan Rice has many suitors. However, the former Chelsea academy product has done all of his development and growing up at West Ham United. The Hammers have given the player the chance to become an England regular, to play every minute he is fit for, and to play in Europe.

Though this years jaunt on the continent ended with a whimper against Eintracht Frankfurt, Rice has impressed hugely. His form has seen most UEFA Champions League contending clubs in England sniff around the player. However, the 23-year-old is expected to pick up a rather healthy new contract with West Ham if the Hammers can iron out the final few parts of the deal.

The new deal is expected to pay him as much as £200,000 per week, which would put him in line with the biggest earners in England. It would also see him take on a deal that lasts until 2030, with an eight-year term signed. Though it is highly unlikely he would see out all eight years of that term, it would give West Ham security in terms of finally getting the record fee they want for the player.

With 48 games so far this season, Rice has picked up five goals and four assists. Given he plays as a holding midfielder, that is an impressive return. For West Ham, the main reason for tying down Rice is to both have security and to show present players and future signings that the future is bright.

Can West Ham progress after a stellar season?

When David Moyes first returned to the club, most seen it as an unambitious mistake. The Manuel Pellegrini era had been a costly flop, but Moyes was seen as an unimaginative and dour appointment. Instead, the Scot has turned West Ham into a functional and fun attacking team who can score goals aplenty. The challenge for the Hammers, though, is making sure this season is not just a one-off.

As it stands, the Irons look almost certain to miss out on European football – though only just. If they can finish the season with a flourish, which would likely include beating Manchester City, they could return to Europe next year. That would go a long way to convincing players to stick around, and for new signings to arrive.

The likes of Oli Watkins of Aston Villa are being linked, but a failure to qualify for Europe would kill momentum for the club. It would also likely mean that some of their star players, including Rice, would look to the exit sooner.

How the club end the season will be vital to making sure next season can be a positive one for the club. The hope is that Moyes can keep things ticking over better than Slaven Bilic could. The Croat had taken West Ham into Europe before a meltdown seen him leave the club.

If Moyes can keep Rice across the summer and add more numbers, then the future could still be bright for West Ham. It all, though, tinges on their ability to see out the remaining games in the league and land a European spot for 2022-23.