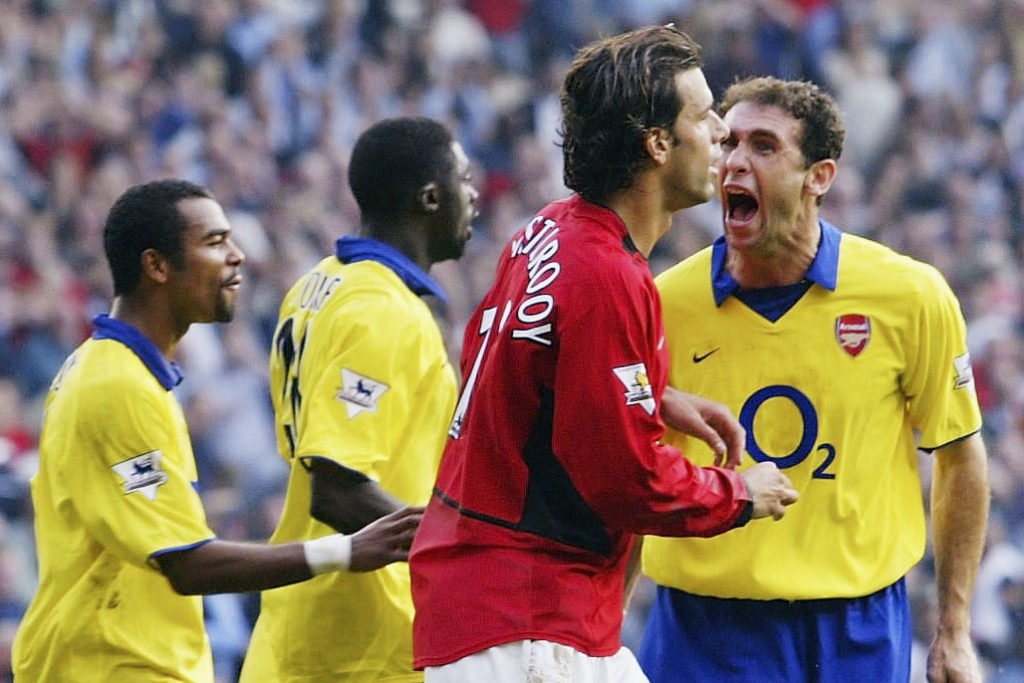 Arsene Wenger's first full season in charge of Arsenal ended in a dual domestic triumph, with the north Londoners winning a domestic double of Premier League title and FA Cup. They beat Manchester United to top spot in the top flight by a single point, which means their two wins against their closest challengers proved decisive.

The second victory, a 1-0 success at Old Trafford in March, was the more pivotal given its timing, but a 3-2 triumph at Highbury before Christmas proved that Arsenal were genuine contenders. Goals from Nicolas Anelka, Patrick Vieira and a Teddy Sheringham brace made it 2-2 heading into the closing stages, when David Platt struck the winner to give Wenger's men all three points.

Manchester United's treble success in 1998/99 was undoubtedly one of the greatest achievements in English football history, but it was not just the Champions League trophy that almost ended up in another club's hands. United, of course, relied on a stunning late comeback to defeat Bayern Munich in the continental final, and they only narrowly edged out Arsenal in the Premier League title race too, finishing a point above the Gunners.

Their 1999/00 success was much more comprehensive, as United racked up 91 points to Arsenal's 73. An August win at Highbury set the tone, with Roy Keane's double cancelling out Freddie Ljungberg's goal towards the end of the first half.

In early February 2002, Arsenal found themselves down in fourth place in the Premier League, with their title hopes hanging by a thread. Yet 13 consecutive wins to end the campaign saw Wenger's charges scoop the prize by a seven-point margin over second-placed Liverpool.

They wrapped up the championship with a 1-0 victory at Old Trafford in May courtesy of Sylvain Wiltord's second-half goal. That completed another domestic double for the north London side, who had won the FA Cup a few days previously.

One of the fieriest games between the two clubs came towards the start of the 2003/04 season. Dubbed the 'Battle of Old Trafford', the match featured 31 fouls and the sending-off of Arsenal captain Patrick Vieira for kicking out at Ruud van Nistelrooy, who had previously jumped on his back when challenging for an aerial duel.

Van Nistelrooy then missed a penalty in second-half stoppage time, much to the delight of the visiting players. Martin Keown, Lauren, Ashley Cole, Ray Parlour and Kolo Toure all confronted the Dutchman at the final whistle, while several United players also got involved. The 0-0 draw later proved significant, with Arsenal ending the Premier League season unbeaten en route to the title.

Arsenal's lengthy run without defeat came to an end after 49 games thanks to United. It was another feisty encounter, with Wenger left fuming with some of the hosts' tackling and referee Mike Riley's failure to punish it. Wayne Rooney won a controversial penalty in the 73rd minute and, this time, Ruud van Nistelrooy made no mistake from 12 yards. Rooney then put the game beyond Arsenal late on, wrapping up the win for Alex Ferguson's side.

The drama did not end at the final whistle, however; the two sets of players confronted one another in the tunnel, and Ferguson was even hit by a flying slice of pizza thrown by Cesc Fabregas.

Patrick Vieira and Roy Keane's famous altercation in the Highbury tunnel preceded a thrilling match under the floodlights in north London. Vieira himself opened the scoring early on, before Ryan Giggs restored parity in the 18th minute.

Dennis Bergkamp ensured Arsenal went into half-time ahead, but a Cristiano Ronaldo brace and John O'Shea chip gave United the win. Neither team was celebrating at the end of the season, though, with Chelsea retaining the title at the pair's expense.